Here is a critical analysis and investigation of an interactive media product from my unit 104-105 assignment.

when investigating the piece of interactive media i asked myself these questions to ensure that I critically evaluated the example and met the distinction criteria.

I thought it best to start with an introduction into the interactive media example, I didnt want to dive straight in to evaluating, this gave me some starting ground for my investigation.

Interactive media can be in the form of games. Games can include those found on the web, CD or DVD ROM or games played on a games console. Games require a high level of interaction by the user usually by moving a computer mouse, pressing buttons on a controller or aiming a remote at the screen. By interacting the user can make there character explore interactive environments, complete certain actions or moves and even respond to other characters in the game. 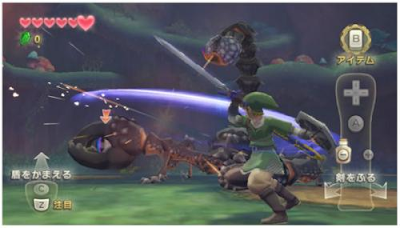 Here is an example of a game being played. This particular example is from "The Legend of Zelda Skywards Sword". The creators of this game have combined interactivity where the user swings the remote to swing the characters sword and level exploration to enhance the users experience. The interactivity in the above example lets the user control the character and explore the environment by pressing different button combinations on there controller. This interaction allows the user to progress through the game. The game is uses sound effects to let the user know if they are injured or if they have unlocked something in the game a specific sound effect is played.. A limitation with these particular types of Game are that you have to have a games console to play it on which can be quite expensive. Without it you would not be able to play this game. However the interactivity in video games such as this example creates an extremely high level of entertainment that is endless which justifies buying the console.

thats the evaluation done, now time to investigate the use of interactivity, fonts and overall design, i decided to compare this to another example to make my investigation ore comprehensive

I asked myself these questions...
How is the example interactive?
What does the interactivity help the user achieve?
How does the particular example illustrate the point you are trying to make?

How clear is the font is it easy or hard to read? Why?
What are the uses of the fonts?

Is the overall design a good or bad example of interactive media?
Why is it good or bad?

The use of interactivity in this particular example requires the user to swing a Wii remote and press buttons on a controller making there character complete certain actions, these actions change depending on the combination of buttons that the player presses. There are on screen images of the controllers that move showing the player exactly what they have to do to interact with characters, use weapons etc. these images have been strategically placed so they will provide a visual aid for the user without decreasing the user experience by blocking the action.

The use of fonts in this game are bold and easy to read and provide on screen instructions on how to use the remote and what buttons to press on the controller. The placing of the font is on the sides of the screen and stands out against the background without obstructing the players view of the screen. The use of font in this interactive media example is not limited to on screen instructions
if a player interacts with another character or object a text box appears at the foot of the screen providing the player with information that allows them to progress with the game.

This video game “ The legend of Zelda, skyward sword” is a very good example of a piece of interactive media that has been designed with the user in mind. As mentioned above the placement of visual aids on the screen has been well thought out to help the user and does not decrease the user experience unlike the example below from the game Shrek cart for the iphone.

Show another example of similar interactive media..
How do the examples differ?

The font in this example that is meant to help the user determine what position they are in in the race is too large and obstructs the users view of the screen. The iphone screen is smaller than the screen you would use to play a conventional video game which makes this design choice even worse. The outcome is that it greatly decreases the user experience.

...and thats it, it may seem like alot of work but if you dont waffle on and get straight to the point youll find that your critical evaluation practically writes itself, if you include examples this also helps but only if you include exactly what it is about the example that illustartes the point you are trying to make, and thats the difference between a merit and a distinction.
Posted by Victoria at 12:03